Today is the last day of September. I almost missed my deadline for this post, but I made it!

This is the out of blue, but do you know what “hyogo” are? They’re writing on posters that tries to convey messages to the public. In Japan, they’re usually illustrated with characters and put up at stations. You’ll know what I’m talking about as soon as you see one. The following is an example of one. 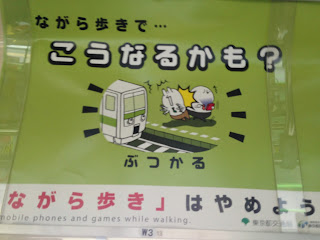 The Tokyo Transportation Bureau created this one. I found it on a bus and took its picture recently. In this poster, two strange creatures (not human beings) bump into each other on the platform. Also, the train has eyes and a mouth and is making a surprised expression. There are hyogo above and below the illustration.
We Japanese have seen these all the time since childhood, so we don’t find them special, but don’t you feel this is a bit weird?
The author Haruki Murakami lamented once that there are too many hyogo in Japan.

By the way, I didn’t take this picture because I liked the poster, but because this hyogo has some grammatical points worth mentioning.
Do you know what “nagara aruki” (#1) is? This means walking on the platform while using your cell phone. It’s hard to see, but the character on the right side is looking at his red phone. He is focusing on his phone so much that he bumped into the person next to him.
Of course, you can use this grammar with expressions other than “while playing with your mobile phone” (keitai o ijirinagara). “While reading” (hon o yominagara) or “while being drunk” (yopparai nagara) are both types of “nagara walking” and could cause accidents.
The left part of this picture is cut off, but the English sentence says “No mobile phones and games while walking”

It seems many people think that it’s easy to use “nagara”, but I’ve realized that even advanced learners often misuse it. Everyone is convinced that “nagara” is the same as “while”! “Nagara” is certainly often translated as “while”. However, there is one important condition.

nagara: A person is doing two activities at the same time

Here are some examples of correct usage.


Here are some examples of mistakes.
Do you see the problems? The first example describes activities done by two different people. In the next one, “ame ga furu” (It is raining) is not the speaker’s action. As you probably noticed, you must have the same subject before and after "nagara".

Here are the corrected sentences:
Next, “kou naru kamo” (#2) indicates that this kind of result may happen because of “nagara walking”. "kamo" is the casual/short form of "kamo shiremasen".

This is such a simple hyogo using only one kanji, but it includes three useful expressions! It’s a great one to use as Japanese learning material. Do you ever try to learn Japanese by reading hyogo or advertisements?

Anyway, when you put these three expressions together, it reads “Please stop walking while looking at your mobile phone. It may cause an accident.” Yes, this is true, but each of us just have to pay attention to our surroundings. I wonder how effective this hyogo is in decreasing the number of the accidents?
投稿者 Minako Okamoto 時刻: 11:36