I'd like to announce my plan for this Golden week.
I'll have charity Nihongo lessons online. If you're interested, I'd appreciate your participation.

Your donation will go towards supporting the COVID-19 crisis. Please use one of these websites.

Dates: Monday May 4th, Wednesday May 6th and Saturday May 9th
Time: between 9 am and 5 pm JST

1) Please email me (okamoto9327@yahoo.co.jp) and book a lesson.
2) Please make a donation after you receive my confirmation email.
3) Please send me a screenshot to prove your donation.
4) I'll send you a Zoom invite. 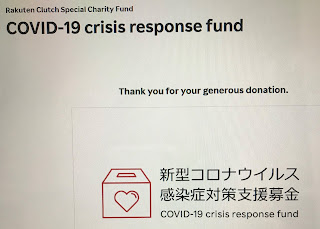 Konnichiwa. I’m posting for the first time in a long time! This post is about how you refer to yourself: “watashi,” “boku,” or “ore”. This is a very basic topic. I’ll start with a simple question.

It’s important to understand this point. I sometimes meet non-Japanese people who don’t know this — in particular, male foreign students in high school or college want to look mature and tend to prefer “watashi”. But when they say “watashi wa”, I always find it awkward. I think they should go with “boku” or “ore” while they’re a student and switch to “watashi” when they begin to work. Moreover, working Japanese men don’t always refer to themselves with “watashi”. They do so at work, but use “boku” or “ore” casually when they talk to family or friends.

The next point is about how to differentiate between “boku” and “ore”. “Ore” sounds rougher, but “boku” doesn’t sound cute or girly. Please remember this clarification.

How do Japanese boys or men select
one or the other? I think it depends on their taste or which one fits them better. Since they are native Japanese speakers, they can make an appropriate choice more easily, and whichever is chosen, it never seems odd to me.
But, honestly speaking, when I hear a non-Japanese man using “ore”, I sometimes feel it’s a bit strange because “ore” has a certain roughness to it. So, I recommend “boku” just to be safe. (This is just my personal opinion, though.)

We tend to think casual language is easier than formal language, but actually, casual language is also difficult. Polite Japanese is hard because its terms, grammar and usages are complicated. On the other hand, the nuances and connotations of casual expressions are hard to understand.

There is a common element between “watashi, boku and ore” and “oishii, umai and ume-” (which are three different ways to say “delicious”).

Oishii: Used by everyone.
Umai: Sounds masculine and rough, but sometimes used by women.
Ume-: Not used by women. Sounds a bit crude used by even men, but might be no problem if it’s used properly.

However, it might be difficult for a non-native speaker to determine the right situation for “ume-”. Thus, if men say “oishii” or “umai” and women say “oishii”, it would sound appropriate and carry no risk.

However, I feel bad when I write such things. Today, we shouldn’t define masculinity or femininity in such rigid ways. So, you should choose the way of speaking you prefer. At the same time, I think it’s important to know what impression you’re giving to others based on who you’re talking to and what kind of situation you’re in.

Watching TV or movies will help you learn which words or expressions are commonly used and also provide a better understanding of contexts in which they are used. I recommend the Japanese animated series “Aggretsuko”! Every character has a different personality and social status, so each one speaks Japanese differently. On top of that, you can learn Japanese culture, too.

Our world is in a critical situaction. We all should be responsible for our own behaviors. Please stay healthy! 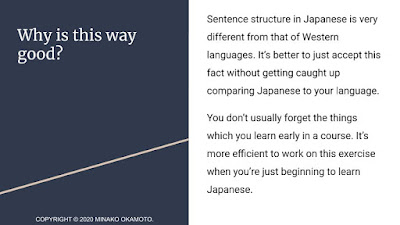 If you like to find out how this works, please drop me a line!
I'll show you all of the slides and explain!

The other day one of my students requested me to show him a list of common question words. I wrote the list on the whiteboard during the lesson. Today I'll share the same list here.


Here are explanations for the words marked in yellow.

docchi : meaning “which one” when you have two alternatives like meat or fish. It often refers to directions like this way or that way.

donogurai/donokurai：refers to time, distance or degree.

ikutsu：A general counter for objects, so you can use “ikutsu” for anything you want to know the number of. There are many other counter words for certain types of objects. Japanese people usually choose the appropriate counter word over “ikutsu” according to the object in question.

dokonimo: “Ni” is a particle which has two different meanings when it is used with “doko”. One indicates direction meaning “to” or “towards”. The other one indicates location meaning “in” or “at”.
How is a series of these words used? Let’s take the nani-series as an example.

Listing out these words really helps you learn them. I suggest you always make lists or charts of words or expressions in your notebook. This way is much better than writing down the words randomly!!

Long time no see, everyone! I have been busy and lazy this year, but I finally wrote one English post on a quiet day in August. I'm happy to do it.


What expressions are used with ta-form?

Verb B changes its tense depending on context, but verb A always takes ta-form because it has a sense of completion. Particularly, even though the actions of sentence 1 are not in the past, “tsuita” (ta-form) is required.

Watashi wa itsumo tsukareta toki, massage ni iku. (I always go get a massage when I get tired.)

The whole sentence is in the present, but “tsukareta” is the ta-form. This expresses that I go get a massage after getting tired.

Given the above chronological order, you must indicate the completion of “becoming tired”.

This works for “ta ra” in the same way.


Soko o migi ni magattara, eki ga aru. (If you turn right there, there is a station.)

Kyoto ni ittara, kireina niwa ga mitai. (When I go to Kyoto, I want to see a pretty garden.)

Takarakuji ni atattara, nani o kaimasu ka? (If you win the lottery, what would you buy?)

Eki ni tsuitara, anata ni denwa o shimasu. (When I get to the station, I will call you.)

The first verbs (A) are all ta-form. After those actions are done, the second verbs (B) are conducted or occur. In other words, verbs B follow verbs A in terms of time.
Many people wonder why if-sentences require ta-form. I hope this explains why.

Christmas is just around the corner and 2018 will end soon. I'm glad that I can make this post today! Minasan, Merry Christmas to Yoi Otoshi o!! (Merry Christmas and Happy New Year!!)

The obvious difference between them is just “wa” and “ga,” but is that really all there is to it? And do both mean “That’s good”?


The basic rule states that text following “wa” and text preceding “ga” is emphasized.
Please keep this rule in mind and consider the following examples.

A: renkyu chu wa kuruma ga komu kara, densha de iku koto ni shimashita. ( I decided to go by train because traffic will be bad during the holiday week.)

B: sore ga ii desu ne. (That sounds like a good idea.)

B is agreeing that “It’s a better idea to go by train rather than by car” because the part preceding “ga” (“sore”) is what is focused on.

It seems that A and B don’t have any plans other than A’s Nikko trip.

A: Christmas no ato ga ii na. (AFTER CHRISTMAS is better.)

”Christmas no ato ga ii na” has the same connotation as “Coffee ga ii desu” (Coffee is better/I prefer coffee/I’ll have coffee) when answering the question “Nomimono wa kohi to ocha, dochira ga ii desu ka?” (Which would you like, coffee or tea?).


A: watashi no kaisha wa Christmas kara oshogatsu made zutto yasumi nan desu. (My company will be closed from Christmas till New Year.)

A: sore ga ii! (Now that sounds great to me. * I’m trying to make the meaning of “ga” visible in English.)

“Sore wa ii” in example 4 shows the speaker’s opinion on whether the previous sentence, which “sore” refers to, is good or not. It’s just like examples 1 and 3 too.

A: kodomo o tsurete kite mo ii? (May I bring my children?)

This “ii” indicates giving permission. Further, “wa” in “kodomo wa” and “inu wa” lines up the two topics in contrast. This means I allow you to bring children, but no dogs.


B: 29 nichi ni kaimono o tetsudatte moraeru? (Can you please help me with grocery shopping on the 29th?)

A: sore wa ii yo. demo, asa hayakattara, tetsudaenai kamo. (I don’t mind, but if you go in the early morning, I might not be able to.)

In this case, A accepts B’s request in the previous sentence, which “sore” refers to, and says, “Okay, I’ll do it!” This has a different connotation from “ii ne!” (That’s nice!).

After going through those examples, I think you’ll see that it’s better not to consider “sore wa ii” and “sore ga ii” to simply be equivalent to “That’s good” and “That’s nice.” They often imply something else besides those simple translations. In either case, you can’t interpret these phrases correctly without understanding the previous sentences. Please be aware of the context where they are used.

Nihon wa atsui desu!! (It's hot in Japan.) Kyo mo Tokyo wa totemo atsui! (Today is another hot day in Tokyo.) Despite the heat I hope you're having a great summer.

I'm sorry for the radio silence. I haven't posted anything since June.
Today I’d like to discuss something that I sometimes notice when talking with foreigners.

How would you phrase these English sentences in Japanese? Dictionaries say that the English “so” =  “sonna ni” or, conversely, that “sonna ni” is “so”. Therefore, I think many people would use “sonna ni”. But unfortunately, that isn’t correct.

You need to review how to use “so” in order to understand this mistake. “So” is used as “very” or “extremely” in the sentences above. In this case, “so” can’t be translated into “sonna ni”. Use “honto ni”, “totemo”, “cho” or “sugoku” instead.

“So” can be replaced by “very” in these sentences. Once you understand this usage of “so”, please move on to the next example.

B said “sonna ni”. This doesn’t mean “very” or “extremely”. B is asking “Is it that good?” while seeing A’s reaction.

“Sonna ni” refers to what was previously said in the conversation. It’s about something the second party is experiencing or has experienced. So, it refers to the degree of deliciousness that A has mentioned.

Let’s go back to example 1.

A apologizes many times.

B: sonna ni ayamaranakutemo ii yo. (No need to apologize that much.)

“Sonna ni” refers to something the other party is doing and has just said, and it indicates the degree of A’s apologies.

There is another way to use “sonna ni” also. I think the third one is actually similar to “so” in English. I’ll write about it sometime soon. I don’t want to confuse you, so I won’t write too much this time.